CONNECTING AT 1G OVER CAT5e

Many network appliances, workstations and other endpoint gear include 1Gbps Ethernet ports. For most such devices, the only way to connect them to a host switch is using this 1GbE RJ45 port over a CAT5e Ethernet cable. An interesting situation arises when that host switch has open SFP slots but no 1GbE copper ports available. There are two primary ways to resolve this problem. One is to use an optical SFP in one of the SFP port, a length of duplex fiber, a media converter and finally a CAT5e jumper cable to connect to the endpoint (shown below).

The second it to use a 1000BASE-T SFP module equipped with an RJ45 port and then a CAT5e cable directly to the endpoint as shown below.

The second method is certainly very simple, low-cost, and contains the fewest points of failure. However, it is limited to approximately 100 meters distance over the CAT5e cable. The first method has the advantage of being able to cover a vast array of ranges depending upon the type of optical transceiver used, up to 500 meters if 1000BASE-SX or up to 80km if a 1000BASE-ZX is used.

In this application note the second approach is used, highlighting the features of the 1000Base-T Copper SFP in handling the 100 meter and under applications.  For a real-world example a Cisco Catalyst 3850-24S will be featured as the host switch and a Dell Latitude 7290 laptop will act at the end point device.

The Dell Latitude laptops are high-performance business-oriented machines. They are built around the 8th generation of Intel Core technology, from the i3-8130U up to the i5-8350U. All models come with 128G or 256G Solid State Drives (SSD) and either 4G or 8G of DDR4 2400MHz memory.

The important feature regards this application is that all 7290 laptops are equipped with a 10M/100M/1G Ethernet port. This supports the connection required to the host switch over a CAT5e Ethernet jumper cable. 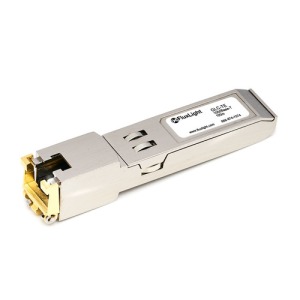 FluxLight’s GLC-TE is a Cisco® compatible 1000BASE-T SFP Transceiver and is factory pre-programmed with all the necessary configuration data for seamless Cisco network equipment integration. The GLC-TE is capable of auto-rate negotiation at 10Mbps, 100Mbps or 1Gbps. These transceivers perform identically to Cisco® original transceivers, are 100% compatible and support full hot swapping operation. The GLC-TE is 100% SFP MSA (Multi-Source Agreement) compliant.

PUTTING IT ALL TOGETHER

Installation of this configuration involves plugging a 1000BASE-T SFP transceiver into a switch and connecting it to a laptop using a CAT5E cable. The FluxLight GLC-TE is fully compatible with the Cisco WS-C3850-24S-S and is plugged into one that switches 24 SFP slots. A CAT5e cable of appropriate length is used to connect to the 10/100/1000Base-T port built into the Dell latitude 7290 laptop to the FluxLight GLC-TE in the host switch.

This note demonstrated the use of the GLC-TE on Cisco and Dell equipment. FluxLight offers 1000Base-T transceivers for many other vendors as you can see listed on this webpage or follow this link. FluxLight is continually expanding its compatibility list so, if you don’t see an OEM listed for which you would like compatibility, please contact us at: 888-874-7574 or quotes@fluxlight.com